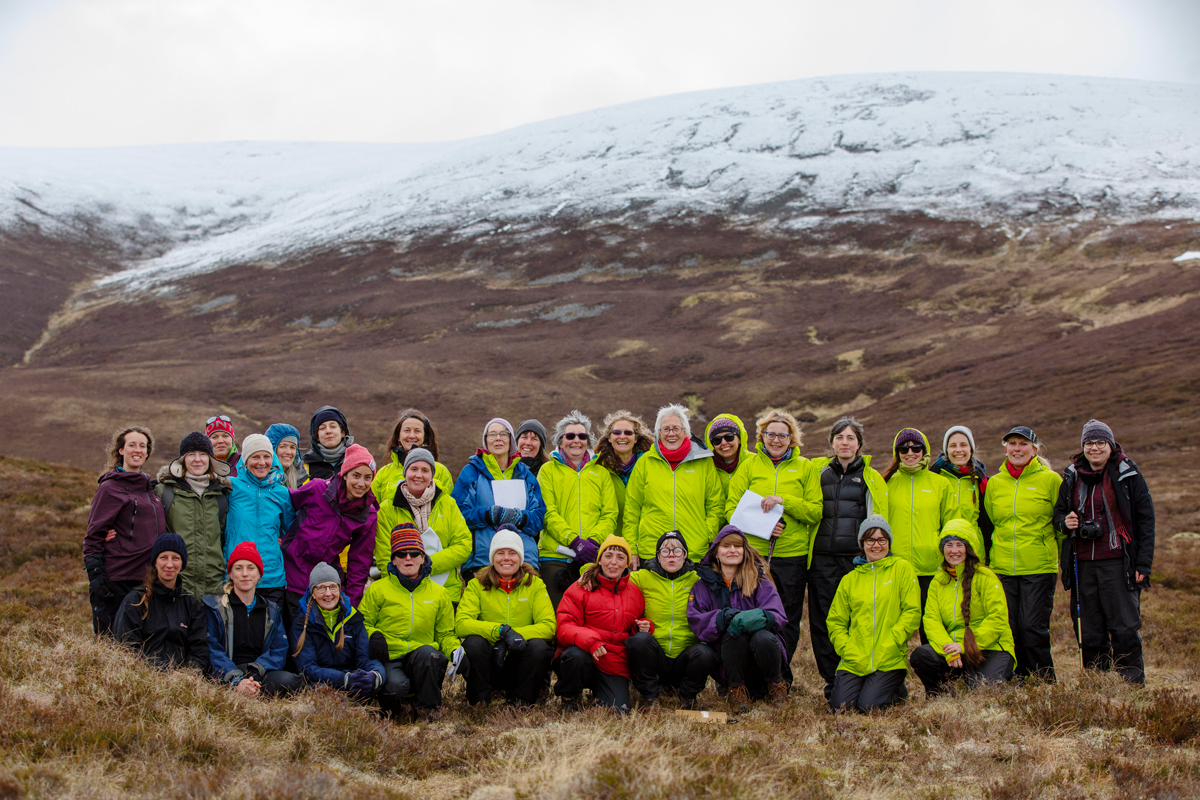 Some months have passed since the Into The Mountain performances and with this we have invited the amazing team of women who made it happen to share their reflections, thoughts and feelings after the event. From production to performing, guiding audiences and behind the scenes, all have taken something away from the collective experience of Into The Mountain into their daily lives and practices.

Here, a member of the choir, Margaret Moore, shares the process of singing with Lucy, Hanna, and the rest of the group:

“I was in the choir singing the score being recorded for the film of “Into the Mountain” in Kincraig Village Hall on August 10, 2019. It’s a pleasant hall, new with a lot of wood. The plan was to practise for a couple of hours, record the score, have lunch and then go out into the Cairngorms to sing there. Rain was forecast.

We warmed up, a semicircle around Laura and Hanna. The score begins with “ahs” and “yo-do-dos”. I was doing the “Ahhs”, where you can flow between A, G, F or stay on one note. No problem. But it was a problem when we started, in Aviemore, in another beautiful hall. My singing experience is all about staves, notes, bar lines. For a while I was totally at sea with “Ahhs” and “Yo-do-do’s” and so on flowing across the page. When to start, when to stop, what do people want? But it did make a lovely sound, so I stayed.

The tricky bit of the score is the second part, the rhythmic part. It starts with Hanna and Laura flinging what sounds like a melodic shriek into the air and then we – Sandy, me and Catherine – come in with “he-u-we -ho”, A, G, F, Catherine lagging. We take the time from Hanna and Laura and we keep it going. The other parts come in on top. Lagging means coming in a beat or two after the start. I spent the best part of an afternoon in Aviemore trying to do lagging, could not get the hang of it. Catherine loves it, thank goodness for that. But we are too driving, Hanna says. Embody the sound. Right. So we bounce it a bit. We do it again. And again. And again. “You’re working”, she says now, but still the piece is not right so we do it over and over and over. I joked once that us He-u-we-ho’s were the Charlie Watts of the piece. How did Charlie do it? In a lull I make a run for an energy bar in my bag.

The rain didn’t come, it’s sunny outside, heating up in the hall. The piece is still not right, we break for lunch. Back after a pleasant time sitting on the grass in the sun. We go on to the “outro”, the part that ends the rhythmic section and it is recorded in one take. Then the next section – C – also done quickly. Back to section B. All OK, finally. The sun is shining through the hall windows. The last section is the best, I think. It is a re-arrangement/re-interpretation – not sure how to put it – of a traditional song “Up a Wide and Lonely Glen”. Part of our preparation was to listen to Jeannie Robertson’s 1953 recording of it on the Tobar an Dualchais site. She had it from her mother, who came from Ballater. We sing words and phrases from this, but it’s one of those cases where words are useless to describe what happens. We’re singing – Julia, Angela and me this time – “there di I spy”, “lonely”, “fare thee well”. The score is colour coded, we’re pink, high voices. Hanna’s bringing in the high voices, Laura the lower. We do it several times. Gradually I bear in on it. Shape the words. Pay attention to endings. Put all I can into our first “Fare the well” – the top of the piece, so to speak – lower and sadder for the second.

Rain finally comes and the change in temperature makes the roof creak. Difficult for recording , but it’s done. We’re going out to sing. A spot near the ski lift. I go to the car to get my walking boots on ready, then realise I’m going to have to drive so better not. My brain’s mushy – heat. The walking is a Big Thing far as I’m concerned. I went to two rehearsals up at the performance site but then couldn’t do the actual performances, which led to weeks chuntering in my head about getting old, giving up versus falling over, etc. etc.

Back in the hall they are waiting for me. We’re doing “Shh” – passing breath from one to another. In the middle of the recording I want to cough, I’m bent over, just hold it until the finish.

I follow the car in front, don’t know where the ski lift is. I look down and realise I’m driving in my socks. At the car park near the lift we are attacked with midges. Julia’s got cream, gives me some. We are to walk a short way up a little brow – you could measure it in yards. I go up, huff, huff, huffing. Really. Midges swirling everywhere. Can’t sing for midges. Have to come down, find another spot. We find it looking out over Cairngorm. It is suddenly cooler. My brain clears. No midges. We sing. A song sung by Jeannie and many others, re-made now, and I fling my “Fare thee well” out over the land it came from. And that was it.”

We use cookies to ensure that we give you the best experience on our website. If you continue to use this site we will assume that you consent to the use of cookies.Accept